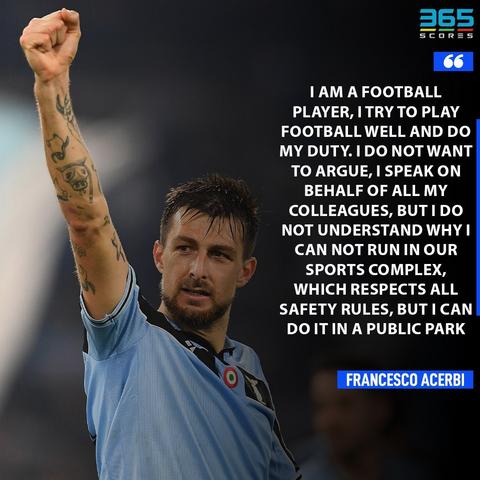 Days of interviews in the Lazio house to feel the mood of the white-collar dressing room during the quarantine break. On the frequencies of Lazio Style Radio 89.3 today it was up to Ciro Immobile. The cover man of the season of the boys of Inzaghi spoke of the new decree ratified by the government:

"I agree with the club and the teammates. The president said well about me and Dzeko, it seems crazy to go to Villa Borghese instead of Formello where we have six camps and four separate entrances. We may never meet each other. I think it's discriminatory, we don't know what to do. Many teammates are living this situation on their own, not everyone has had the chance to bring the family to Italy. We hope to start and distract people a little bit at this bad time. I have read a lot of divided comments on the subject, we want to resume in maximum security and with the permission of the state. Knowing the president, the director and his teammates, I'm convinced there's no controversy, we're just trying to understand the reasons for this choice. They told us if the reason is that the league won't start again. All the players I hear are just waiting to get back on the field to get back to doing what we like, no one was against reopening. Some people don't think about football, for others it's a **** of outburst: if the conditions are right, I'll leave right away."

"I want EXPLANATIONS"- "Even from an economic point of view there is only a small percentage in Serie A that can have problems, I think rather of the lower categories and those who work around football. So many people are experiencing a moment of crisis, as other activities reopen, the same must happen for football. These are people who do not earn like us, without sports goes into difficulty: journalists, insiders... I preferred to remain silent on social media not to make controversy, but also because they would write to me that I was pushing for the resumption of the championship as second in the standings and first for the Golden Shoe. I don't give a damn, I just want to do my job, what I miss the most. I would have said the same even if I had scored five goals. I want explanations as an Italian citizen, just as the Assoallenatori and the Assocalciatori await you. I don't point the finger at anyone, I just want to know when I can get back to training. We are ready to play even in the heat every three days, more than that we can not do. My family and I have followed all the directions of the state."
Vrh

There is a good player, and a great star, and after a legend. But above all these comes Paolo Maldini.
POBJEDNIK SportSport.ba CALCIO LIGE SEZONA 2015/16
Vrh